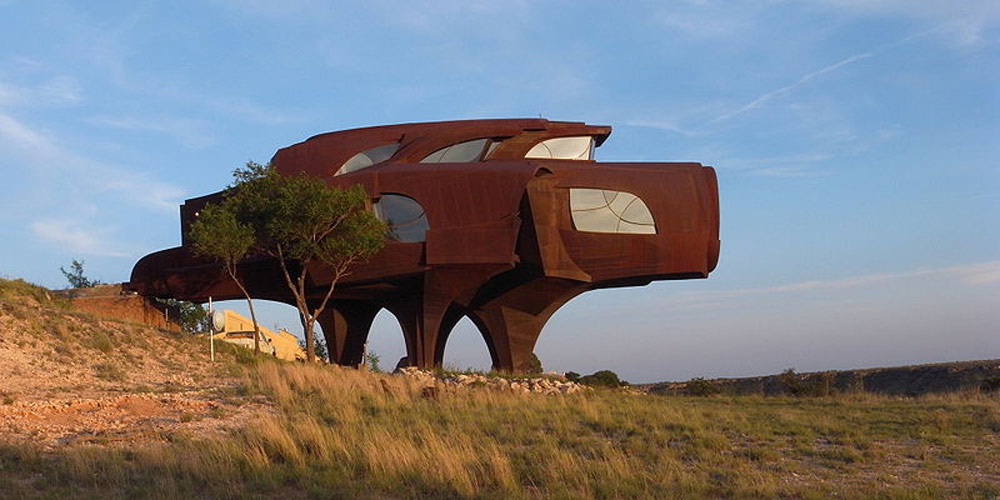 About 15 miles east of Lubbock is a house that has baffled and amazed many in the West Texas area. Started by Robert Bruno in 1974, the steel structure has garnered attention from many architects all over the world.

Composed of 150 tons of organic steel, the house is three levels and 2,200 square-feet. From the outside, viewers see a bulbous top sitting on thin legs leading down towards the ground. Many people say the steel structure looks like a spaceship or, at least, something out of a SyFy movie.

When they get inside the building, visitors enter the second level. This level houses most of the essential amenities needed to make the steel structure a home. There is a small kitchen adorned with a window overlooking the canyon outside. A few more steps in, there is a large, circular living room with another window in the back. There is also a bedroom with bathroom attached.

One of the unique parts of the inside of the building is a massive spiral staircase, which leads visitors to either the top or lower levels. The top level opens to a balcony, while the lower level is supposed to be an entertainment center; however, it hasn’t yet been completed. The house is fully equipped with electricity, plumbing, and central air conditioning.

One of the main reasons Bruno created this steel structure was to have something that lived beyond his lifetime. Having passed away in 2008, Bruno was never able to complete his project fully. However, he told many people that he wanted the structure to remain as a legacy to his life. He was more concerned with it being an aesthetically pleasing structure than a livable home, but that didn’t stop him from living inside it the entire time he welded it.

Before constructing the famous home, Bruno completed a statue from his sketches. This statue now lives in front of the Architecture Building at Texas Tech University, where he graduated in 1972, to honor the life and legacy of the architect who brought ingenuity and creativity to a small, West Texas town.